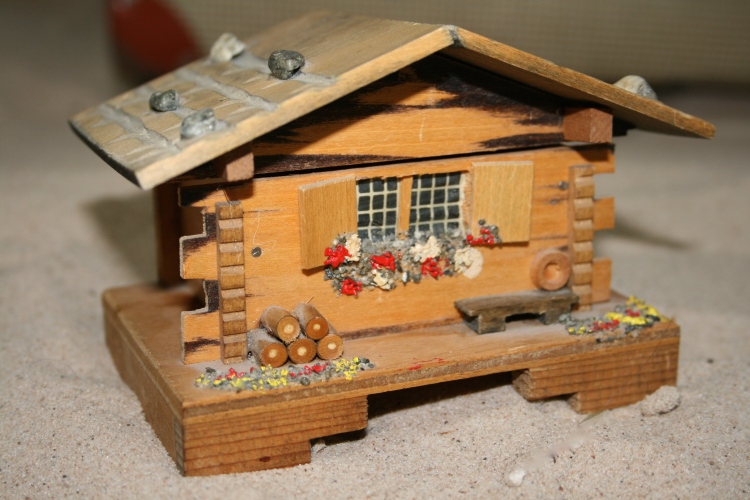 This is a post about the effects of working with trauma in a creative practice, and most specifically about using the notion of postmemory to direct research and create output.

My project centres on the rupture within my family at the hands of the Franco dictatorship, which in 1939 succeeded in ousting a democratically elected Republican government in Spain. The subsequent lifelong exile of my father in England formed the emotional texture of my own beginnings and has dominated the landscape of my psyche in secret ways, for this was a history unspoken due to trauma and repression. I grew up not knowing why my grandparents lived in Barcelona or why we shuttled constantly between this idyl and the bleakness of  1960s-1970s Birmingham where we lived.

In my own work there is an additional dimension of Specific Learning Disability (SpLD). Again this is something that has dominated but remained secret (or rather unknown) and is becoming revealed to me later in life.

Recently I discovered that I have dyscalculia which crosses over into dyslexia. Following sequential steps and linear argument is hugely challenging, and I’m essentially unable to access the realms of number, science and many abstract areas of thought. My natural territory is swooping intuition based on what I can touch and see. I am also awaiting a formal diagnosis of autism. This is a process I have decided to be very open about, in part because I believe autism is crucial to my ability to work with postmemory material in a multiplicity of ways.

Autism is a plus in both my life and work. It makes me both more susceptible to emotions (contrary to stereotype) and more visually sensitive than average. I am socially capable but with strong preferences for solitude, order and the blissful flow of creative life in my studio. My most valuable tools in this work are my abilities to focus, to absorb emotional material like a sponge and to draw in diversely connecting layers of information in both written and visual forms.

But this hyper focus sometimes leaves me particularly open to traumatic material such as (while obsessively following news events) exposing myself to  a video which appeared online the day after the English parliament voted to bomb Syria, in which footage of a five year old Syrian girl who had later been killed by Russian bombs featured. As I opened the link I knew it was risky and hesitated, my finger hovering over the command key. You can’t un-see traumatic material. After some moments I gave way to the stronger sense of moral obligation to witness

This experience revealed to me that I was becoming numbed by internet exposure to recent developments in world events including terrorist attacks and a political situation in my own country I felt powerless about and experienced as deeply alienating. To my horror I could feel nothing. What I viewed felt remote and as unreal as a movie. Registering this as a troubling signal of creeping emotional brutalisation I headed for the studio.

It is with particular sensitivity that I have sensed the political landscape in Europe unravel in recent months. Since the refugee crisis peaked during our Indian Summer I’ve felt a horrendous and uncanny deja vu with the events I never lived through via a combination of second hand information (research) and the information I now know I imbibed through family atmosphere – postmemory material.

In my work I’m piecing together the unspoken and potentially unspeakable, yet speak I must. When I’ve attended rallies in support of refugees it’s been with a keen sense of a family obligation to do so – the wheel coming full circle. 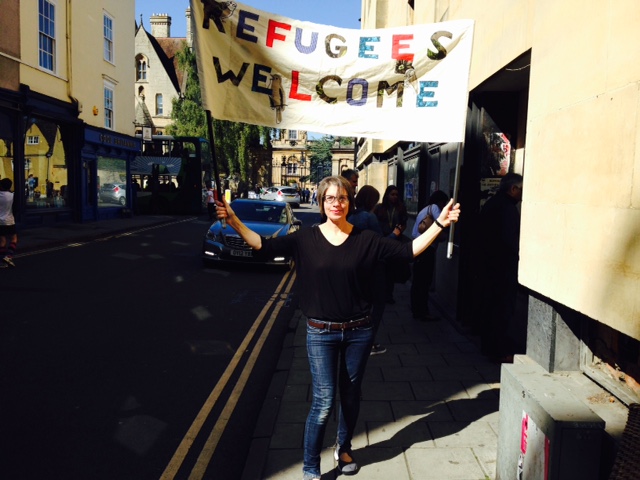 The #RefugeesWelcome banner made with a dear friend Alex van Hensbergen.

It’s not the first time I have bumped up against the knowledge that not only my subject but also the internet based reach methods I use can expose me to trauma. In honouring my family and exploring inherited trauma I have often had to do a species of one step forward two steps back dance. I’ll re-traumatise myself if I’m not careful. The dilemma is that I must do this work as the sense of obligation is acute. I must keep going and yet to re-traumatise myself is not only undesirable personally speaking, it would  also stall the project.

It all boils down to looking without looking too much, yet knowing when to stop and when to move forward can be difficult. Hyper focus means my research stamina is almost limitless and stopping isn’t easy, but I’m also a trained art therapist and my compass for what is healing is strong. Tried and trusted methods are at hand and it becomes possible to navigate the postmemory ravine (as I shall call it) with a paint brush in my hand so to speak.

Painting it out is a powerful antidote to the creeping numbness and other symptoms of traumatisation such as acute anxiety and insomnia. Pausing is generally a good idea too and getting back to the good in humanity through positive human contact. I would suggest that almost any creative act brought to a level of resolution is potentially healing. Most valuable also in these periods of recovery is the opportunity to experience the work and in particular the working processes of other artists.

As recovery is a process itself, it can be that a combination of these healing factors is needed to get back to a place of sufficient recuperation to work again.

That very day in my studio I resolved a painting and created one of the most explicit and uncomfortable pieces of work I’ve ever made on war. “Trajectory of your bomb through my washing line” was a direct response to the vote on Syria and my act of witness. But I still couldn’t conjure an emotional response to the girl.

“Trajectory of your bomb through my washing line.” Sonia Boue, mixed media, 2015

I heard Cornelia Parker speak at the new Western Library in Oxford. It was extremely inspiring. She’s an affable and charismatic speaker who exudes brilliance through a seemingly boundless creative curiosity. This was a real treat.

I took a day out with Ali Berrett a dear longstanding artist friend with whom I have over the years spent many hours in deep conversation about art and life. Our day included a viewing of Anne Hardy’s exhibition Field at Modern Art Oxford. Beforehand we were two somewhat worldweary people taking a break. Afterwards we felt uplifted and cleansed of the contamination of terror and it’s endless reflections in mass and digital media in our lives. I was immediately impressed with the power of Hardy’s immersive installations to transform me, to shift more than mood.

Cornelia’s work resides in open planes, by which I mean there is no one fixed reference point in our culture for what she is doing with her work although there are many distinct allusions to be found. Paradoxically it is rooted in the specifics of quotidian life and the physics of the material world. It strikes me as an intensely playful if not anarchic practice tempered by serious method and an aesthetic of the highest order. The significance of her most famous work Cold Dark Matter – an exploded shed – is not lost in a discussion of bombs on domestic spaces. 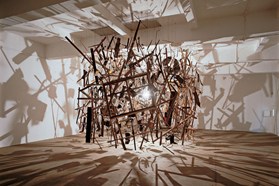 As I came back to myself in conversation with my friend I experienced a painful flashback to the video of the child. My emotional life had been kickstarted by quality doses of human creativity.

For the next two days I did very little work creatively speaking. There’s always admin and thinking to be done in a creative practice but I succeeded in mainly tripping myself up and losing my keys.

In the evenings I’ve watched What do Artists Do All Day, giving myself another dose of Cornelia Parker and also finding new artists to look at. Polly Morgan and Shani Rhys James were also memorable to watch. I listened extensively to Spanish guitar music and realised anew that the warmth of the strings, deeply expressive quality and lively rhythms have become intensely meaningful in my life since beginning my project.

Samuel Diz is a wonderful new discovery for me.

With Anne Hardy there was also a sense of return to a sensory world of before’s. I often now rehearse the phrase I’ve hit upon that exile is the after of the before. The before being the golden time prior to rupture and loss. Probably a time when we didn’t know what we had till it was gone a la Joni. Though I’m talking about childhood innocence.

Hardy’s practice is also also gloriously playful, taking the viewer to far off elemental places deep inside the sensory memory banks of the psyche. In particular I found myself in kindergarten spaces and the wonderment of the nursery. The spaces we inhabit prior to our knowledge of the vile destructiveness of the human race. Spaces where the sensual world dominates in which texture and hue, pattern and form nourish us as directly as the milk we hungrily suck down. This is what we respond to with the abstract form. I was five years old again in the Modern Art Oxford John Piper gallery, with my shoes off responding to the extraordinarily rich 1970’s vibe of this marvellous composition of colour and stroke by Anne Hardy. 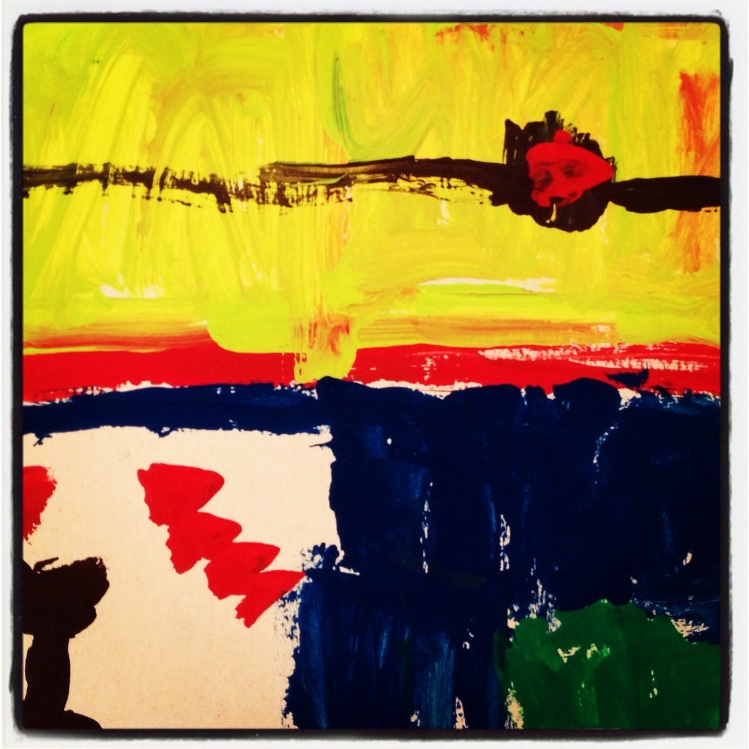 Detail of a kindergarten painting I’ve returned to often, painted when I was 5 in Mexico City.

Art and creativity matter more than we can ever know in the mediation of trauma. It is immeasurably significant in our lives in terms of remaining human in our responses. So it perhaps comes as no surprise that our current government has been seeking to erode it from our schools and public life.

There’s a symmetry here which must not be missed. It is not simply that art is deemed an uneconomic and superfluous activity -a spurious argument at best. It is that art keeps us human and provides us with freedom of thought and expression. Our government doesn’t want this for it’s people and devalues art as it carries out it’s political agenda to undo the welfare system and promote the values of finance.

Through art we play, problem solve and grow. Through it we are able to mediate the most difficult aspects of our existence and resolve some of the most painful feelings known to us. Beauty alone is worth cherishing – it too keeps us human and connected, reminding us of our responsibilities to the planet and each other. Art also allows us to tackle the ugliness of life, and to face our truths and speak their name. We can be overt or we can work obliquely if we wish. Art is about free will and this is what’s at stake in the world today.

Art is how I survive and art is why I continue.

Nine days after viewing an online video of a five year old Syrian child with footage of the families razed property in which we learn that she was shortly after slain by Russian bombs my heart was finally pierced and I wept freely into my morning porridge.

I am an artist. View more posts

3 thoughts on “Surviving a postmemory practice”